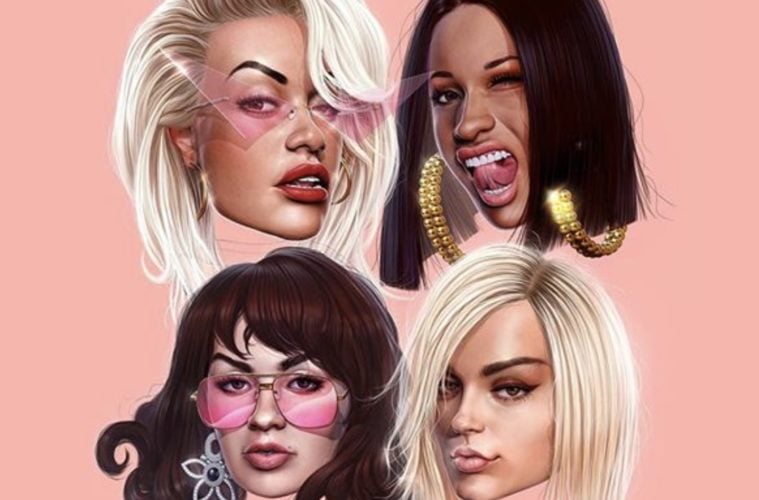 New York rapper Cardi B and Rita Ora have a new smash on their hands. The duo have linked up with Bebe Rexha and Charli XCX for “Girls.”

In a recent Sunday Times feature, Rita Ora revealed she felt discriminated at Roc Nation for simply being a woman.

She said: ‘I want to find the right word here, and maybe this is my interpretation, but I do feel I got discriminated against because I was a woman.’ Talking to the Sunday Times magazine, Rita revealed that her business manager is now her older sister Elena, and confessed to being ‘proud’ of their achievements together. (The Times)

A couple years ago, Rita talked about her publicized split from Roc Nation.

“I’m still happy I’ve had this incredible experience,” she said when we quizzed her on it. ” Jay is one of my idols and Beyoncé is obviously the queen of life. I’ll never not appreciate the experience I had with them and the things I’ve seen.” Rita adds that Beyoncé and Jay Z have been “great mentors”, which doesn’t sound like there’s any hostility there to me, although when asked if she’s still close to the couple, she simply says “I look up to them a lot.” (Cosmopolitan UK)

Past buzz developed about Rita teaming up with Warner Music following her Roc Nation split.

Rita Ora and Jay Z’s Roc Nation have officially parted ways, following a lawsuit filed last year describing an “orphaned relationship” between the British singer and the label, which issued a counterclaim a month later. A source confirms to Billboard that Ora has signed with Warner Music, though specifics of the deal have not been disclosed. Requests to Roc Nation for confirmation of a settlement between Ora and the company were not returned. (Billboard)