Naya broke the news of her new “juicy” memoir being in the works Monday (June 8). 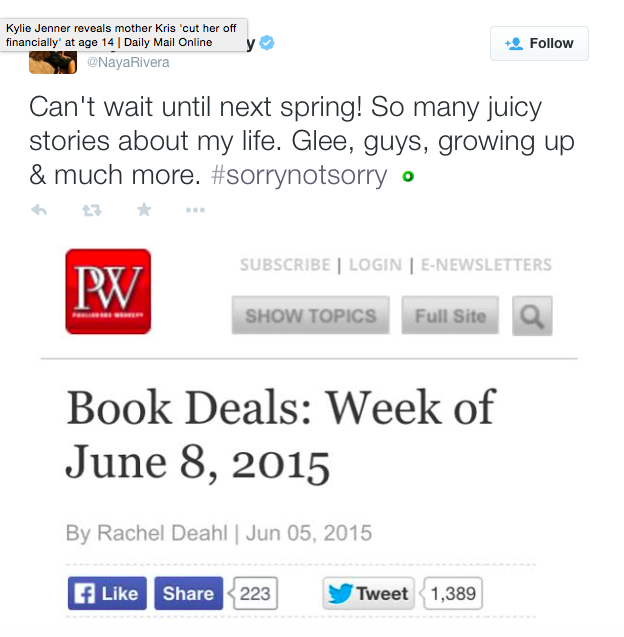 Speculation on whether or not she will dish on her past engagement to Big Sean has already developed.

Perhaps she’ll spill the details on what went down when her previous engagement to Big Sean fell through, and the inside scoop on her surprise wedding to hubby Ryan Dorsey. While she doesn’t confirm exactly what kind of stories she’s going to tell, a source tells E! News readers can expect the actress to be very candid. “She’s going to be very honest and real. She talks about growing up poor and all the trouble she had when she was younger,” the source tells us. (E! Online)

“You can come to that conclusion yourself if you just look at the facts,” he says before pausing and then letting out a laugh. That’s probably why he says he wasn’t shocked by it. “I felt like it was unnecessary drama ‘cause in my eyes it wasn’t true. I wasn’t surprised by it,” he says with another long laugh. “Even though I didn’t steal anything, I wasn’t surprised by it.” (Complex)

Last September, Sean addressed rumors of his “IDFWU” song being aimed at Naya.

“Everybody got someone that they feel like that about, and if you don’t get someone you feel like that about, you felt like that at a time in your life, just having fun with it,” Sean said in an interview. “I sounded angry? I wasn’t angry. The funny thing about ‘I Don’t F*ck With You’ is I actually wrote that while I was in a relationship. I wasn’t like, bitter. I wrote that while I was with my ex. Obviously after a few things went down I went back and changed a couple words, but mainly the song was already there. It’s funny how things play out, but that song is an anthem. I love that song.” (MTV)