In April, Electronica publicly apologized to Lamar for dissing him during a Periscope session. 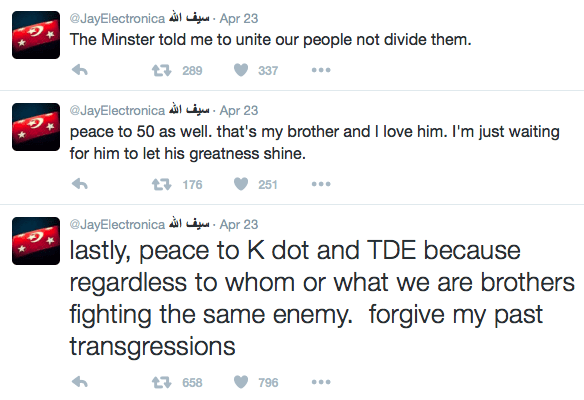 Back in February, Jay Elect lashed out at K. Dot on social media.

“Put some Kendrick on? Nah, f*ck that, f*ck that. F*ck that. Look, I like the one Kendrick song with Gunplay, ‘Cartoons & Cereal,’ but other than that? We don’t know what that n*gga’s talking about. … We don’t know what these lames are talking about. … You can’t say ‘F*ck Kendrick,’ that’s still our brother. That’s still our brother. ‘Kendrick would body you,’ look, you couldn’t pay Kendrick a million dollars. Kendrick will tell you himself he couldn’t body me. Kendrick is my son. Kendrick is my baby. Kendrick wishes he could be like me.”

In 2013, Ab-Soul labeled Jay Elect as his spiritual advisor.

“He’s just a deep dude,” Ab-Soul said. “He’s really who he is. Man, he’s the Black God! He’s a fan of my music and he connects with me on that level. I think we touch on a lot of the same things. He just hit me up out the blue.” (MTV)