Both hip-hop artists resorted to their Twitter pages to speak out against Ave. 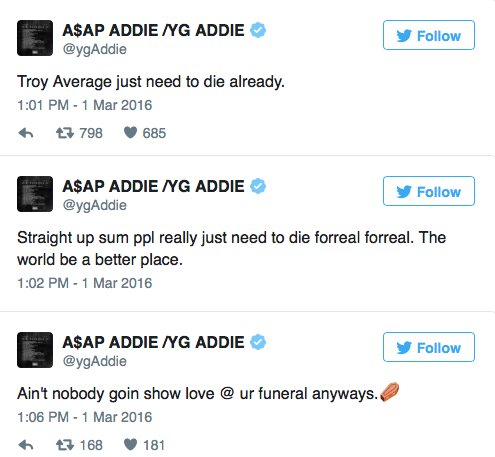 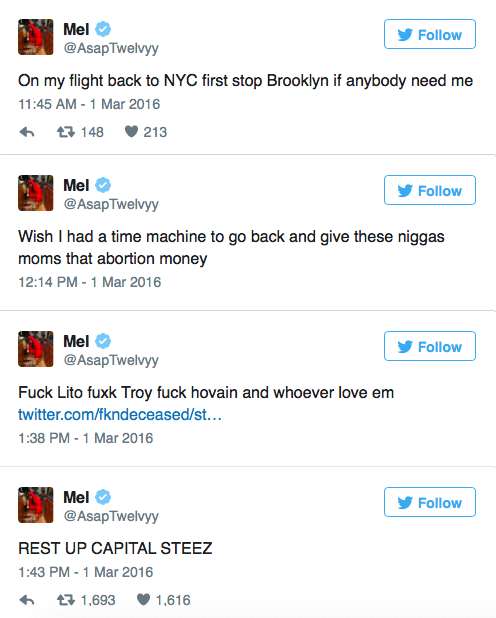 Troy called into “Sway In The Morning” this week to explain where his feud with STEEZ affiliate Joey Bada$$ stemmed from.

“I was minding my business, doing my thing, getting my money. I was focused in spreading love, promoting positivity, not preaching the negative. I’ve been doing that the whole entire year. … We’re really independent. I spend my own money on investing in myself – we’re really in the streets. Then he threw a subliminal saying I technically sold 60,000 records, we’re the number one independent label – I forgot what I said but it was something along the lines of you’re signed to Sony and Cinematic and this and that, oh, you work for those people and you sold 60,000 records and nobody cares. It was something like that. After that, somebody reached out to me – I said tell him not to say anything about me anymore. … Then I’m chilling, minding my business – then I see other weirdos in my comments with a black fist, I guess he made a song with called ‘Ready’ and I still ain’t even listen to the song. First time I heard it was on the radio last night – I heard the line – I’m like, ‘What’s that about dog? Why would you think it’s OK or safe to speak my name?’ – I’m not for play. So he opened Pandora’s Box by bringing his other boy Kirk Knight into this.” (“Sway In The Morning”)

“He ain’t pass away, he killed himself. God gave you life, it ain’t your right to take that. That’s a fact. I got n*ggas that’s really dead or in jail with a life sentence that might as well be dead, they would have traded their life with his. That ain’t my business, Sway. I don’t care, that’s not my business. Joey Bada$$ opened Pandora’s Box – he got friends who is killing himself. That speaks on your character – You started with me. There’s no rules in a reaction – there’s no rules in beef, there’s no rules in reaction. I don’t start with nobody, but I finish it. You can’t never tell how somebody is going to react. If CapitalSteez was alive, he’s be riding with him.” (“Sway In The Morning”)

On his new “Bad A**” song, Troy blasts Joey and Capital.

when weirdos jump in ya comments but you understand that their only outlet is online and you'll never see them on the streets 😂😂😂 P.S if somebody pushes u in the back and you turn around and split they head with a baseball bat it's not your fault …. they shouldn't of started! #YouNotReady when ya homies kill they self they suckas forever it speaks to ya character and the company you keep WEIRDO $HiT! 🔥🔥🔥 hell Fire! NEVER COMMIT SUICIDE YA'LL it's not the answer, GOD is Great! #RealVsFake 📷 @doncam.z