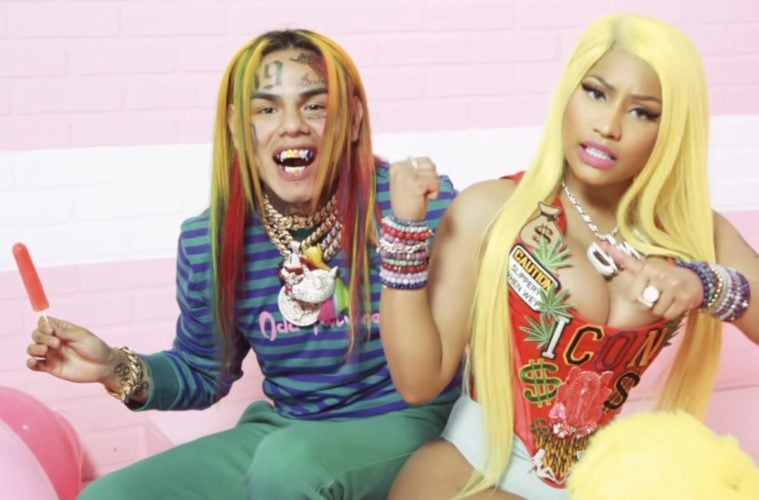 New York rapper Tekashi 6ix9ine is legit ride or die for Nicki Minaj. New reports claim the hip-hop star did more than just shade clothing brand Fashion Nova over his loyalty to the Queen of Rap.

According to reports, Tek recently inked a six-figure deal with Fashion Nova and did the company wrong by censoring a shout-out on “MAMA” over Nicki’s rival Cardi B having a relationship with the brand.

As for the song itself, when it was released the lyric was changed so the reference to Fashion Nova was deleted and replaced by Apple Bottoms. As for why it was changed … a source tells us Nicki Minaj was enraged because Cardi B has hooked up with Fashion Nova for a new clothing line, so she asked Tekashi to 86 the brand from the song and he obliged. We’re told the company hasn’t yet demanded money back from the deal … they’ll wait to see what happens with Tekashi’s trial … and, hopefully, work something out. (TMZ)

To make matters worse, a Fashion Nova product placement in the song’s music video is scrapped as a result of a shooting derailing production.

Fashion Nova maybe naively believed Tekashi would deliver, so they gave him the entire amount up front. At first, it seemed things were hunky-dory, because the teaser to the track that Tekashi posted on Instagram included the Fashion Nova lyric. Fashion Nova believed its deal with Tekashi was solid during the shooting of the music video for the song, which was derailed by a real shooting. And, check out the pic we got … Fashion Nova is emblazoned on the screen with those phat asses. (TMZ)

After the song initially leaked, Cardi B responded to shade presumably fired her way from Nicki.

#CardiB responds to #Nickiminaj’s line on ‘MAMA’ on #6ix9ine’s album #DummyBoy, Nicki said “Never having to give a rap producer head”

On the leaked record, Nicki appears to low-key throw shade at Cardi and past rumors about her having sexual relations with people in the industry.

“I was out in Spain rockin’ a Medusa head/I ain’t never have to give a rap producer head/If I do though, I’ma write a book like Supahead/This ain’t wonder that I’m making, this that super bread/Splish, splash, fuck him in a hurry, quick, fast” (“Mama”)