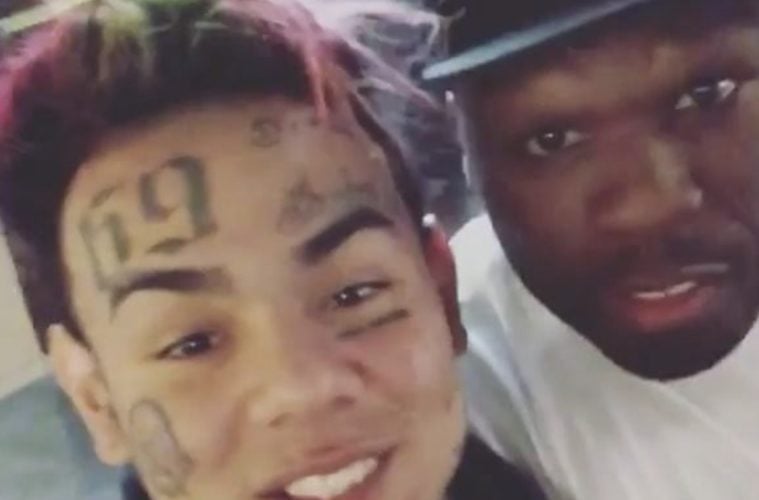 New York rapper 50 Cent is back on his trolling. The hip-hop star has clowned his “Get The Strap” collaborator Tekashi 6ix9ine over missing a court date.

Fif went to Twitter Wednesday (October 10) and said Tek’s mental state is to blame for him going ghost on a judge.

🤦‍♂️My son is a little retarded your honor is there anyway, l can go get him and bring him to court🤷🏽‍♂️ pic.twitter.com/mjUnybm2v8

According to reports, a judge threatened Tek’s attorneys Wednesday (October 10) about not showing up in court and said a warrant would be issued next time.

The rainbow-maned rhymester skipped out on his court date Wednesday, prompting a Brooklyn judge to threaten to have him locked up next time he misses a scheduled appearance. “Counselor, if your client is not here on Tuesday, [there’ll be] a bench warrant,” Judge Edwin Novillo told the rapper’s lawyers. (Page Six)

Reports claim Tek has started to make it a habit of missing scheduled appearances.

The judge put the pressure on 6ix9ine — real name Daniel Hernandez — because the rapper has now missed two appearances in the cop-assault case, where he’s accused of squeezing an arresting officer’s hand too hard while being cuffed for an outstanding warrant at JFK Airport on July 11. He skipped a court date over the summer after he was kidnapped and robbed, lawyers said. (Page Six)

In September, 50 trolled 6ix9ine with a handful of social media posts.