New York rapper 50 Cent always finds the best and most hilarious content across the Internet. The hip-hop veteran went online this past weekend to share some cringe footage of an unnamed woman possibly finding herself in an entanglement.

Heading into Monday, Curtis Jackson went to Instagram with some jaw-dropping savagery. In the clip, a woman low-key loses it after realizing her face might have been filmed as she turned up on a mystery man.

Fifty knows his girlfriend Cuban Link is someone special. The hip-hop star recently went online to share some of his favorite moments from a surprise birthday party she put together for him. Fif lit up his Instagram feed with pics from his unforgettable night and admitted he had never had his own surprise celebration.

“I had a great time, it was the first time i had a surprise party. #bransoncongac #lecheminduroi” – 50 Cent

A few weeks ago, 50’s ride or die Cuban Link hit up Instagram with a must-see birthday celebration highlight video. She also revealed being the brains and mastermind behind putting together the epic celebration.

“Collection of beautiful moments 🖤 .. Keeping this a secret was so hard 😅he had no idea what was going on for a few weeks but I pulled it off.. The turnout was simply amazing! . Special thank you to @frantasticevents girl you did such an awesome job!!Everyone honestly enjoyed themselves🤎 . #quarantinesafe #positivevibes #family #love” -Cuban Link’s Instagram

The same week, 50’s protégé Tony Yayo lit up social media with birthday moments from the rap star’s celebration. Yayo shared a clip from the event and revealed what they dined on. 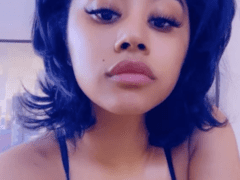