50 Cent Reacts To NY Knicks Star’s Shooting: “I’m A See If I Can Get His Stuff Back, Today!”

Fif offered to help the 24-year-old get his stolen possessions back on Instagram. 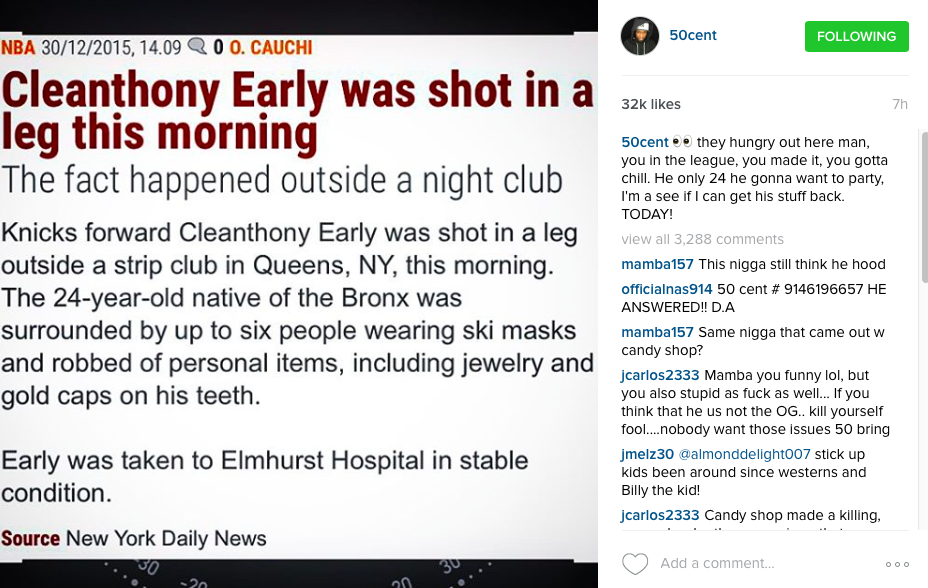 Early’s teammate Carmelo Anthony has already spoken out on what happened.

While speaking to reporters Wednesday afternoon, Anthony, who recently appeared in a PSA denouncing gun violence along with other NBA stars, said, “we need to do a better job of putting ourselves in a safer environment,” in regards to the shooting of his teammate. The forward also added that he believes something has to be done in regards to gun control. (Sports Illustrated)

It's funny how no one says "damn that's messed up! His career could be over" they just say "he shouldn't have been out so late" #Really!!

So because I play basketball means I can't go outside? That's what y'all telling me? Lol people just want to hear themselves talk!

Since when has it been a crime to have fun with ya girl? #GuessThatsWrongHuh?

So let me ask y'all a question! So you believe you can't go to the club an be out past 12 without it being your fault????

Earlier this month, another Knicks player made headlines for a crime-related incident.

The Knicks released a statement saying they were aware of the shooting and “relieved that he is not in a life-threatening situation.” He is the second Knicks player targeted in the past month. Teammate Derrick Williams was partying with two women before more than $600,000 worth of jewelry disappeared from his apartment. (New York Daily News)