G-Unit head 50 Cent has pushed pause on his seemingly daily feud with Fox’s “Empire” hit series by hooking up with the show’s executive music producer Timbaland this week.

Fif showed off a picture of himself and Timbo on Instagram Thursday (December 3). 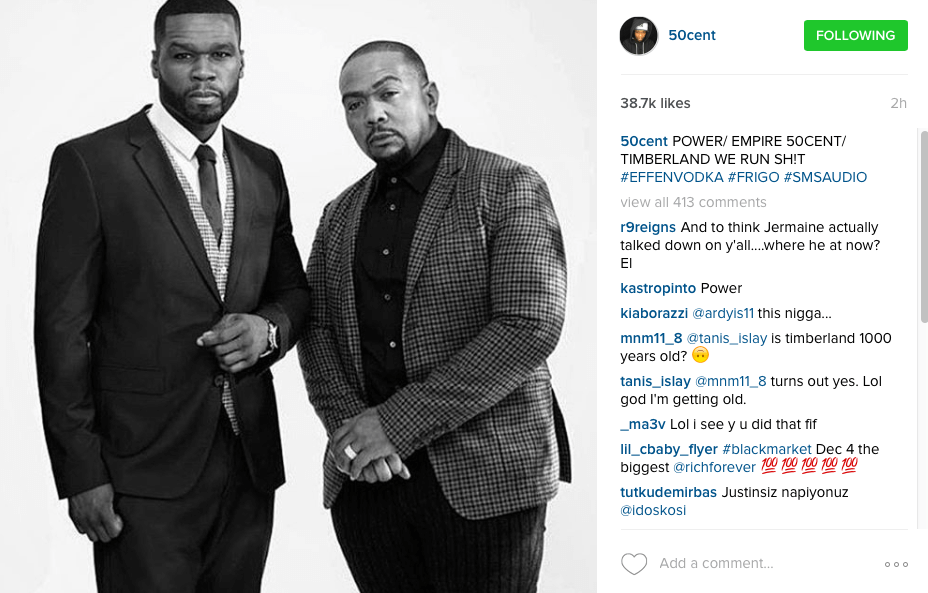 “When you’re the first show to have success with African Americans or Latinos and stuff like that, it follows you because it’s very difficult for you to hit the bullseye on the target demographic. After that happens, they borrow. They borrowed portions of the marketing, they borrowed different things to make ‘Empire’ go to where they wanted it to go. The executives are smart enough to say, ‘We need to do what they did because they just hit the bullseye.’ Because Fox is a different kind of network, commercial networks can spend more marketing dollars.” (“The Whoolywood Shuffle”)

Fif also acknowledged “Empire” took a shot at him on its season two premiere.

“As soon as the season started, the first episode they said something. I just think that’s the writers, I don’t think it’ll actually do damage to what they developed but it will because in every situation, if you go up against someone who has a higher efficiency, you damage yourself. It’s like when I get challenged by artists. I was building something different, I wasn’t concentrating on the music. … You can look at these artists and the guys they would say are competition or call themselves competing with me haven’t sold a million copies once on one album. You see what I’m saying? They’re widely popular in their neighborhood. Just the neighborhood they’re in.” (“The Whoolywood Shuffle”)