Fif treated Instagram followers to a picture of himself strapped with cash Wednesday (March 9). 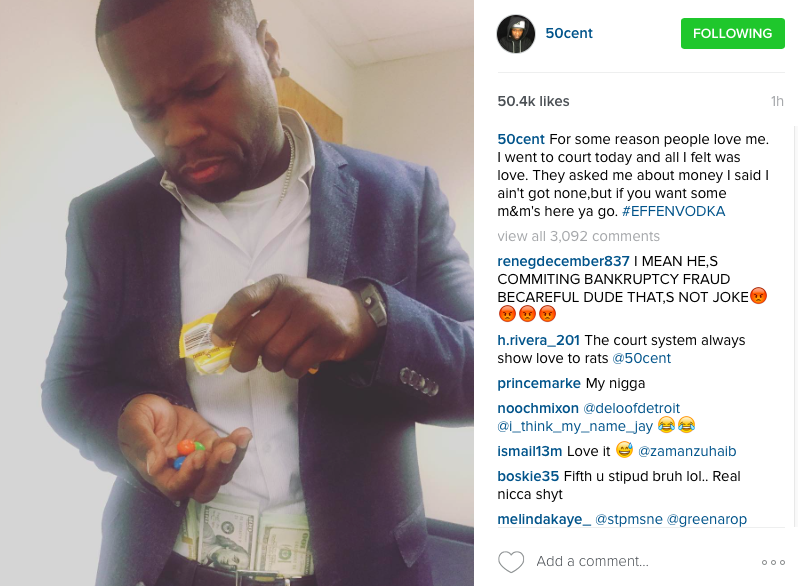 This week, Fif appeared in court and admitted to using fake money in social media shots.

“As a hip-hop artist and entertainer, it is imperative that I continue to project aspirational goals of success in order to preserve my brand and those I represent,” he said in an affidavit filed in federal bankruptcy court Tuesday. “My social media posts are a vehicle to perpetuate the demand for my music and entertainment services.” In his affidavit, he said the bucks were bogus — prop cash used for either music videos or his hit TV show “Power” — and that he was just joking around. (NY Daily News)

The rapper “50 Cent” is heading to court to explain why he’s declaring bankruptcy — while posting pictures of himself surrounded by cash on Instagram. In court on Thursday, the judge told the rapper’s attorney: “I’m concerned about allegations of nondisclosure or a lack of transparency in the case.” (CNN Money)

Earlier this winter, 50 publicly spoke out on his financial status amid widespread bankruptcy reports.

“Look, there’s a difference between filing Chapter 7 and Chapter 11. When you file, it’s because you’ve had lawsuits come in and people receive judgements that’s astronomical, those amounts. You look at it and go, ‘Well, let me restructure,’ because it gives you, from the point you actually file, it gives you five years to do it. So everyone is on a different schedule. They know you ain’t getting paid. So no one’s been paid. Every dime is in the same account that I had it in before you heard anything had happened – did I ever tell you how much money I make a year? But it covers the nut. … It’s greed man, they can’t control it. You see what I’m saying? I’ve been sued for things repeatedly that people haven’t been sued for. They look at you and see you have deep pockets.” (Shade 45 StreetzIzWatchin)