2 Chainz Wants To Hear Your Story: “I’m Giving Back”

G.O.O.D. Music‘s 2 Chainz wants to really give back to the community. The hip-hop superstar has announced plans to dig into his pockets and help needy families.

This week, Chainz went to Instagram to speak out on plans to donate money and help out neighborhoods around the nation.

Tim just using my platform to help change my community. I'm looking for families in need… I'm taking a lot of the sweater money and giving back like last year. Go to my site and go to the "our mission" page to see last years stories and send me families who you know are in need.

Just want to say thank you to @foxsports skip bayless and @shannonsharpe84 for blessing me with the platform to help give back to my community! Came to talk about these ugly Christmas sweaters and how these are changing lives. Preciate y'all! Truuuuuu. 2chainzshop.com

2 Chainz can rock out in true style … especially since the crib he bought was owned by legendary rock guitarist Steve Vai. The rapper plunked down $2.45 million for the 3 bedroom, 5 bathroom Hollywood Hills pad — which includes the famous “Mothership Studio” where the likes of Van Halen and Ozzy Osbourne once recorded music. (TMZ)

In August, Deuce went to social media and revealed his all-time favorite verses. 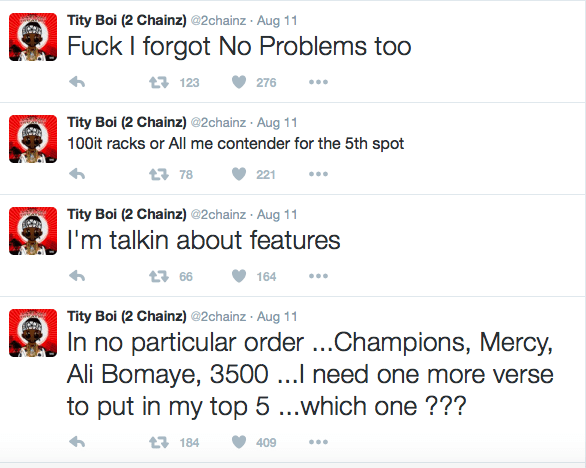 A few days prior, Chainz announced plans to launch a cartoon mini-series.