Def Jam’s 2 Chainz recently dished out some knowledge to hip-hop artists about how to grind and make a career in the rap game.

Deuce provided some wisdom on the perception of earning a living from selling music on Instagram this past weekend. 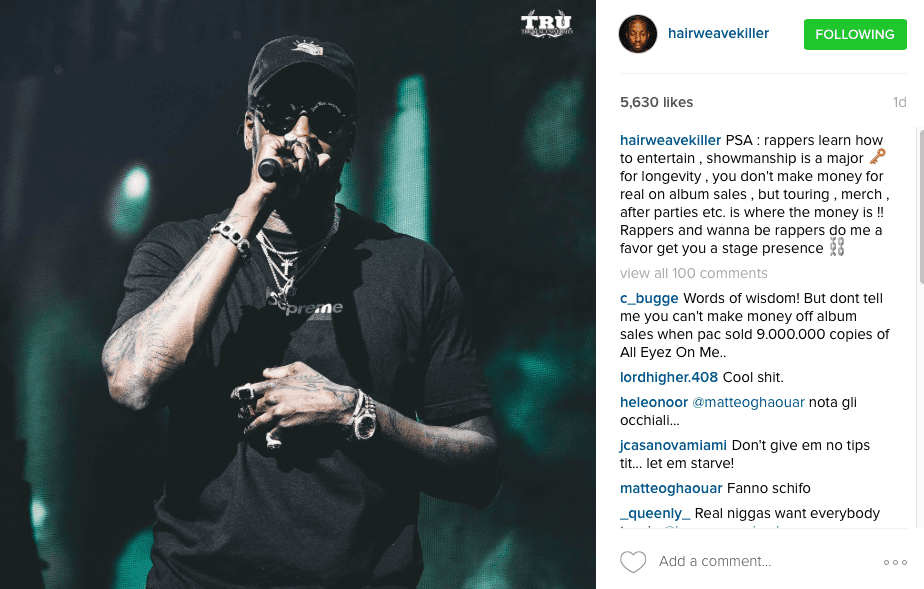 “[Rappers] settle for what works and it’s working. It works for them. That’s why you don’t hear me knocking them. You don’t hear me hating, saying this is that or you shouldn’t do this or that, because it actually works for them. So if it works, it works but I’m just a part of a different culture, a different wave of music. And that wave was Jay Z, Nas, Biggie, and at that time it was all about being the best.” (Shade 45)

“Jay Z,” Chainz said when asked what hip-hop artist he immediately needs to collaborate with. “Yup. You know, we see each other. I’m one of those people whose rapped for a long time before anyone even knew [me]. I’m not like, ‘Let’s do a cipher. Let’s go to the studio right now.’ I don’t even know how to do that with rappers. It’s just gotta kind of happen. ‘Book some time and vibe.’ I don’t even know how to do it. … Rappers are awkward to me. We are stupid geniuses. So when I’m in a room full of rappers, you kind of just wait until they be like, ‘Let me get your number’ or ‘Give me your email,’ or you just don’t. You let it come to you. That’s what it is. You just let it come to you. With the Jay Z thing, I do know he’s worked with a lot of artists from Atlanta, whether it be Jeezy, T.I., so that’s the exciting part. He gave a Southern artist a shot and [we] followed some of the same footsteps as far as a young drug dealer turned into an entrepreneur. That kind of path. That’s kind of exciting to me.” (Power 106)

“[Why the secret?] I think that’s the new way to promote and market things. The original way or the old way was to set a date to get the fans excited about putting the project out and then doing marketing and promo leading up to the album. But today’s youth’s attention span is so short I felt like I could just put out an album and the impulse of it being a surprise album would drive them to buy the project. So it’s called ColleGrove. … This album is my album but it’s like my dedication to him – I have a great relationship with Cash Money/Young Money. He’s like my brother, my friend, actually my favorite rapper. So I just felt like it was time to put out a project or somebody to just acknowledge the fact that he had a lot to do with moving the culture to where it is now.” (“The Wendy Williams Show”)