0
As featured on SOHH.com
1.6k Views Comments Off on Ray J Might Get Last Laugh Over “Famous”: “There’s Too Many Times Kanye Has Done This”
Share

R&B singer Ray J‘s manager has stepped forward to speak out on the controversy rap star Kanye West‘s “Famous” has caused and what legal woes Yeezy might have to prepare for.

According to J’s manager David Weintraub, Yeezy’s dicey visual could ultimately result in a lawsuit.

“We’re talking about potentially doing something. There’s too many times Kanye has done this. You can’t really continue to use people’s likenesses without either compensation or clearance,” DW said before revealing Ye received reference clearances from J’s sister Brandy. “The ‘Famous’ video is like the fourth time in six months Kanye has done this. There were discussions, but it’s getting old, so our legal team is working out what we want to do with everything.” (The Heat)

Last month, Ray’s manager Wack 100 gave his opinion on the “Famous” visual in light of his client’s image being featured in it.

A few days ago, vixen Amber Rose responded to Kanye’s “Famous” and addressed blowing up after dating him.

“The misconception—and I still hear this seven years later, to this day—is, “You’re only famous for Kanye.” Initially, absolutely. In 2009, when they’re like, “Amber Rose—Kanye’s girlfriend,” I was like, “OK, that’s pretty accurate. That’s what it is.” But I didn’t ask to be famous, and I didn’t even talk or do interviews for two years, because I thought, “I don’t want this. I’m not famous.” Over time, with going out in public, I realized it would never go away, so I didn’t have any choice but to progress. Everything I’ve done since then is my own doing, and I’ve worked my fucking ass off for everything I have. But Wendy Williams put Charlamagne on. Jay Z put Kanye on! But they don’t do that to men, and they always want to diminish my accomplishments and put them on someone else when I work really hard.” (The Daily Beast)

Comments Off on Ray J Might Get Last Laugh Over “Famous”: “There’s Too Many Times Kanye Has Done This” 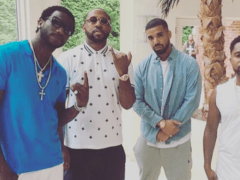